Press Releases Out With the Old, in With the New 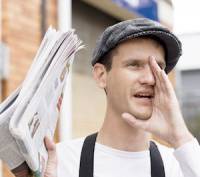 The world has always been addicted to news, but take a look around you–now it is everywhere. Gone are the days when you got your news just from the TV at 11pm or in your morning newspaper. Now it’s on the internet, on your iPhone, in your e-mail inbox. News is available 24 hours a day, seven days a week.

The way we get our news is changing all the time, as more and more people are headed to the internet than ever before. Between 1994 and 2004 newspapers saw their circulation drop 27.6% and local news broadcasts lost about 23% of their audience.

Meanwhile, 80 million Americans go online for their news and more than two thirds of the global internet population access social networks and/or read blogs on a regular basis.

Any sensible company or business is involved in some way in the world of the internet. One of the best ways to get the word out to your target audience about your company and its products and services is via a press release. But just as the way the world receives its news has changed, so has the way press releases are written and distributed.

In the old days, press releases were distributed only to a select group of journalists, editors, and news services, and were simple text missives that were rather dry and boring. The only way a company could tell if their press release had had any impact at all was if they saw their name in print or got a phone call for a follow-up interview.

That was then and this is now. The news can be reported by anyone these days–bloggers, YouTubers, or any number of non-professional journalists. If you can get online then you can voice your opinion and share information with a potentially huge number of other people. An online press release can potentially reach millions of pairs of eyes all over the world. And unlike an old-fashioned press release that only had a limited lifespan, an online press release can be viewed on the internet indefinitely.

If you publish an online press release through a great press release service you will be able to track the number of “hits” it has generated to see what impact your news has had online. Done well, your all-important search engine visibility will markedly increase, something any company is glad of.

When comparing press release services there are four major things they should offer: